A Line Following  Robot, as the name suggests, is an AGV (automated guided vehicle),It follows a Black line embedded on the white background. Usually  the path in which the line follower robot goes is a black line on a white surface but the other way (white line on a black surface) is also possible. Certain advanced Line Follower Robots use invisible magnetic field as their paths.

Line follower Robot is one of the first robots that beginners and students would get their first robotic experience with. In this project, we have designed a simple Line Follower Robot using Arduino and some other components.

•  Block Diagram of the Project

Block Diagram of the Project

Sensors (IR Sensor): We have used IR Sensor Module as the line detecting sensor for the project. It consists of an IR LED and a Photo diode and some other components like comparator, LED etc.

As mentioned earlier, we have used a pre – assembled IR Sensor. In case you do not have one, you can make your own sensor using the following circuit.

Controller (Arduino UNO): Arduino UNO is the main controller in the project. The data from the sensors (IR Sensors) will be given to Arduino and it gives corresponding signals to the Motor Driver IC.

Motor Driver (L293D): L293D Motor Driver IC is used in this project to drive the motors of the robot. It receives signals from Arduino based on the information from the IR Sensors.

Note: The power supply to the motors must be given from the motor driver IC. Hence, choose the appropriate power supply which is sufficient for all the components including the motors.

Motors (Geared Motors): We have used two geared motors at the rear of the line follower robot. These motors provide more torque than normal motors and can be used for carrying some load as well.

In this project, we have designed an Arduino based Line Follower Robot. The working of the project is pretty simple: detect the black line on the surface and move along that line. The detailed working is explained here.

As mentioned in the block diagram, we need sensors to detect the line. For line detection logic, we used two IR Sensors, which consists of IR LED and Photodiode. They are placed in a reflective way i.e. side – by – side so that whenever they come in to proximity of a reflective surface, the light emitted by IR LED will be detected by Photo diode.

In case of black surface, which has a low reflectance, the light gets completely absorbed by the black surface and doesn’t reach the photodiode.

Using the same principle, we will setup the IR Sensors on the Line Follower Robot such that the two IR Sensors are on the either side of the black line on the floor. The setup is shown below.

When the robot moves forward, both the sensors wait for the line to be detected. For example, if the IR Sensor 1 in the above image detects the black line, it means that there is a right curve (or turn) ahead.

Arduino UNO detects this change and sends signal to motor driver accordingly. In order to turn right, the motor on the right side of the robot is slowed down using PWM, while the motor on the left side is run at normal speed.

Arduino UNO continuously monitors the data from both the sensors and turns the robot as per the line detected by them.

•  In order to increase the efficiency of black line detection, number of sensors can be increased. An array of sensors will be more accurate than just two sensors.

•  In this project (where two sensors are used), the positioning of the sensors is very important. The width of the black line plays a major role in the placement of the sensors.

•  The sensor to detect the line can also be constructed using an LED and LDR pair.

•  They are very useful as they can work without any supervision i.e. they work as automatic guided vehicles.

•  With additional features like obstacle avoidance and other security measures, line follower robots can be used in driver less cars. 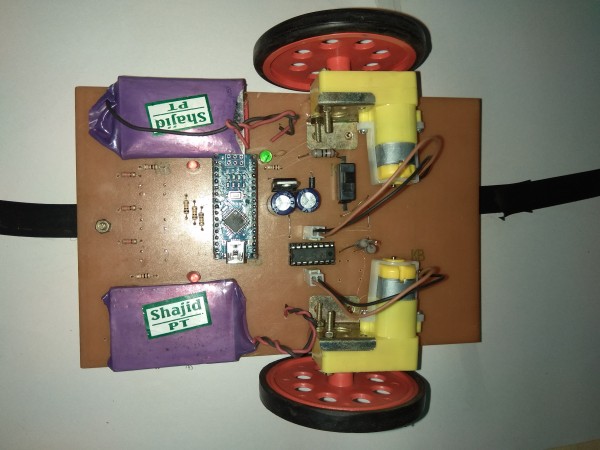 Here are our Bank Details

Your invoice will be generated and sent to your email id.
Thank You